An Institution of National Importance, Department of Science and Technology, Govt. of India

Moyamoya disease is a rare cause of stroke, that occurs in children and sometimes adults. In this disease, the major blood vessels supplying blood to the brain (the internal carotid arteries) become progressively narrow and finally get occluded resulting in stroke. The disease was first described in Japan where it is common. In India, majority of the patients are from West Bengal, Tamil Nadu, Gujarat and Kerala.

What is Moyamoya disease?

The main blood-vessels which supply the brain are the internal carotid arteries and the vertebral arteries. In Moyamoya disease, the main blood vessels are affected after their entry into the cavity of the skull, housing the brain. In this disease process, these vessels progressively get narrowed and finally, occluded. During this progressive phase, the blood supply to the brain is compromised and the patient suffers strokes, known as ischemic strokes (brain damage caused due to loss of blood supply). As a compensatory mechanism, existing tiny blood vessels at the base of the brain enlarge and new blood vessels sprout to compensate for the decreased blood flow. Typically, children develop strokes during episodes of heavy breathing during crying or playing. Patients develop either minor strokes, also known as transient ischemic attacks from which they recover completely or major strokes resulting in permanent weakness and disability. Occasionally, the enlarged blood vessels at the base of the brain enlarge beyond their capacity of blood transport, and rupture, causing bleeding into the brain. This variant of stroke is called hemorrhagic stroke. Rarely the vertebral arterial system, supplying the parts of the brain located in the back of the skull, is also affected by the same disease process. 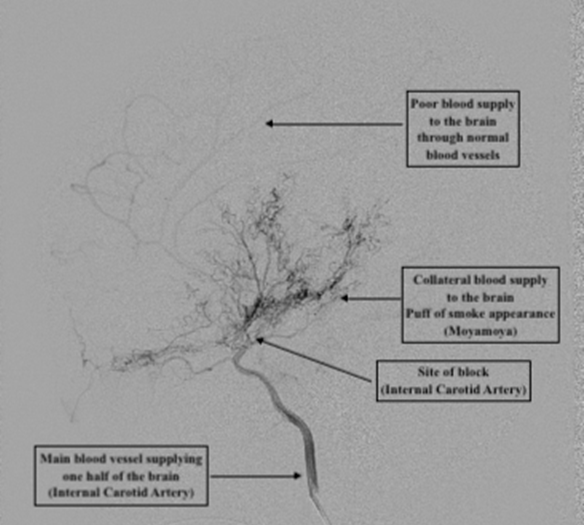 Figure 1: Angiogram of a patient with Moyamoya disease. The blood supply to the brain through the main blood vessels (internal carotid arteries) is occluded. Alternate channels enlarge and engorge at the base of the brain which appear as a puff of smoke in angiography

How do we diagnose Moyamoya disease?

The diagnosis of stroke in a child alerts the doctor to the possible diagnosis of Moyamoya disease. The primary treating doctor is usually a Physician or Neurologist. A Magnetic Resonance Imaging (MRI) scan will reveal the areas of stroke in the brain, often the narrowing of the affected blood vessels and rarely a bleed in the brain. A slightly invasive study of the blood vessels of the brain is the Digital Subtraction Angiography (DSA) which requires admission to a hospital. A catheter is passed through the blood vessel in the groin, to reach the neck and a dye is injected while a series of X-ray images are taken. This investigation will reveal narrowing of the major blood vessels to the brain as well as the enlarged blood vessels at the base of the brain. These engorged tiny blood vessels appear in angiography as a “puff of smoke”. The name of this disease derives its origin from the Japanese word “Moyamoya” which means “a puff of cigarette smoke” (See Figure 1). A CT scan with angiography may also be prescribed during the pre-treatment evaluation. Rarely, advanced tests including MR perfusion study and SPECT are prescribed to understand the quantitative blood supply to the brain.

What is the cause of Moyamoya disease?

The exact cause of Moyamoya disease is unknown. Genetic predisposition due to mutation in RNF213 gene has been described. Cases of Moyamoya angiopathy where an antecedent cause cannot be identified are grouped as Moyamoya disease. Although an antecedent cause for the occurrence of Moyamoya phenomenon can be identified in Moyamoya syndrome, the mechanism of the disease process that results in the blockage of the major blood vessels supplying the brain, is unknown. The occlusive changes of the blood vessels are thought to occur due to molecular mechanisms and mechanical causes.

What are the symptoms of Moyamoya disease?

In children, Moyamoya disease usually comes to attention when a parent notices limb weakness or loss of speech. This is usually precipitated by hyperventilation caused during playing, crying or rarely eating spicy foods. These symptoms may resolve spontaneously. Recurrent episodes of limb weakness or loss of speech may occur. While the disease mainly presents with limb weakness in both children and adults due to decreased blood supply to the brain, rarely a bleed in the brain could be the cause for such symptoms. Headache, seizures (fits), loss or a difficulty in speech, visual disturbances and involuntary movements may rarely be the presenting symptoms.

What is Moyamoya syndrome?

What is the treatment for Moyamoya disease? 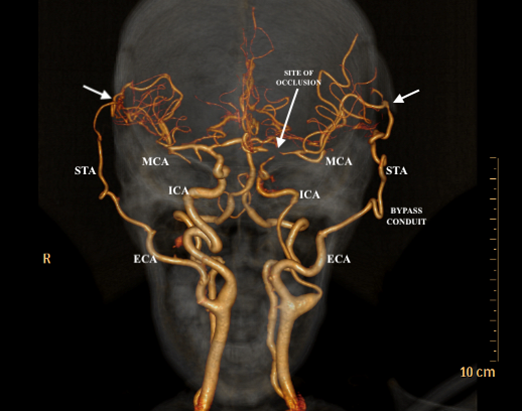 Figure 2: Angiogram of a patient who has undergone direct bypass surgery on both sides. The white arrows show the sites where direct connection has been made between blood vessel of the scalp and that of the brain. The long arrow shows the region of blockage of blood supply through the main blood vessel, the Internal carotid artery (ICA). 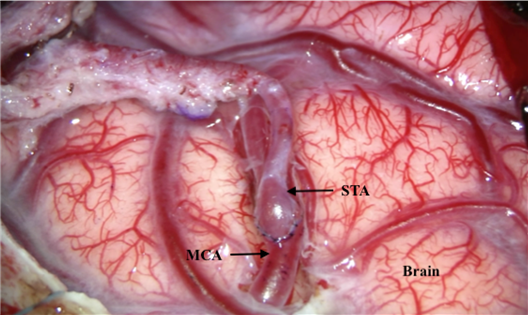 Figure 3: This photograph taken during surgery shows the surgical connection made between the superficial temporal artery (STA) of the scalp and middle cerebral artery(MCA) of the brain.

The surgery is technically difficult as the blood vessels are often very small (less than 1mm in diameter in children) and require suturing under microscope with threads that are less than the thickness of a human hair. While a direct revascularisation procedure provides immediate restoration of blood supply to the brain, as the caliber of these blood vessels is often very small (1-2 mm), they fail to provide adequate blood supply to the brain as the disease progresses. In anticipation for this occurrence, the surgeon performs a series of surgical manoeuvers in isolation or in addition to the direct revascularisation procedure. During the surgery, tissues in the vicinity of the surgical site, including the muscle (temporalis muscle present on either side of the head of the skull), the pericranium (covering membranous tissue of the skull bone), the galea aponeurotica (connective tissue layer of the scalp) and the dura mater (covering membrane of the brain) are mobilized and apposed on to the surface of the brain. Surgical procedures by which new blood vessels' growth from such tissues into the brain is expected to occur are termed “indirect revascularisation” procedures. New blood vessel growth occurs more efficiently in children compared to adults. The surgical procedure is named depending on the tissue involved: Encephalo (brain)-Duro (dura mater)-Arterio (blood vessel and surrounding cuff of tissue) -Myo (temporalis muscle)- Pericranio (pericranium) Synangiosis (joining of blood vessels). Thus, the various surgical options of indirect revascularisation include EDAMPS, EDAMS, EDAS, EMS etc. Multiple burr-hole technique also works in similar principles. Multiple holes are surgically made in the skull to facilitate blood vessel growth from the scalp into the brain. Rarely vascular fatty tissue of the abdomen, called the omentum has been used to promote indirect revascularisation. While surgery provides a definitive treatment for Moyamoya disease, medical therapy provides only a marginal benefit. Aspirin and Clopidogrel are used as blood thinners. While they prevent clotting of blood occurring in the affected narrow blood vessels, they do not provide a cure. Adequate hydration and avoidance of hyperventilation (crying, exertional playing, rigorous exercise and eating spicy foods leading to deep inhalations) prevent the occurrence of neurological deficits in diagnosed cases of Moyamoya disease.

What is the rationale for surgery for Moyamoya disease?

Information about surgery for Moyamoya disease

As Moyamoya disease is usually bilateral (affects both sides of the brain), most patients require surgery on both sides. The disease occurring on one side only, called unilateral Moyamoya disease or quasi-Moyamoya is very rare. Surgery is performed during a quiescent period when the patient does not report any stroke episodes. The interval between surgeries performed in bilateral Moyamoya disease is usually 3 months. If a stroke episode is reported before surgery, a waiting, stroke-free period between 6 weeks to 3 months is recommended before surgery is undertaken. If the patient has very high frequency of strokes (sometimes one to two episodes per day), the decision on surgery is taken with extreme caution. Surgery is not recommended in such patients as the risk of developing a major stroke during surgery is very high. If such a patient is considered for surgery, it is undertaken at a high risk. A quick surgical procedure (indirect revascularisation) is recommended. The surgical incision for a direct revascularisation procedure is linear over the superficial temporal artery. It will be placed within the hairline from above and in front of the ear to the parietal eminence (upper outer prominence of the skull). After surgery, the surgical site may appear soft and boggy as the bone is cut and placed over the muscle.This is done to prevent compression of the blood vessel used for bypass, against the bone. Scalp wound related complications are rare and occur due to compromised blood supply following dissection of the superficial temporal artery. The wound is closed using an absorbable suture. A post-operative angiogram (CT angiogram or DSA) is performed to assess the patency of the bypass. Patients are discharged 3-4 days after surgery. The recommended follow-up schedule is at 2 weeks, 3 months, 6 months, 1 year and yearly thereafter.